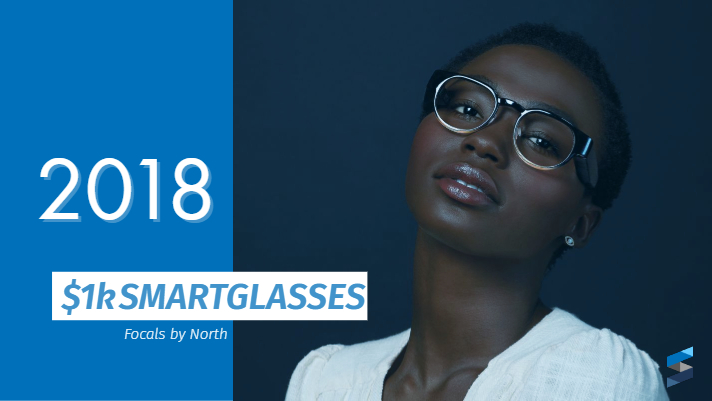 Google took one of the first stabs at the idea of smart-glasses back in 2013 with Google Glass, but the product never really took off. Now, the Amazon-backed startup North – until recently known as Thalmic Labs – is releasing their version of smart glasses with Focals. At $1000, Focals come in well under Google Glass’ introductory $1500 price-point, but will they have more success than the tech giant did?

North has raised around $140 million in funding from investors including Amazon Alexa Fund, Fidelity Investments, and First Round Capital, according to the company. With these investors, North has crafted a pair of slick, custom-built glasses with a display only you can see.  And when we say custom: you have to have a scan done in one of their Brooklyn or Toronto showrooms in order to even order a set.

However, a trip to Brooklyn may be worth it if you’re always looking for the newest in cutting-edge technology. Reportedly, Focals keep you connected with friends and family throughout the day by giving you visual summaries (without completely obstructing your vision), displaying texts and emojis, and even a voice-to-text option. For those more interested in productivity than connect-ability, Focals also offer turn-by-turn intuitive navigation that even offers you the option of calling an Uber!

Aside from other classic capabilities like calendar and weather integrations, as an Amazon-backed startup North also has a bonus feature: Focals come with Alexa built-in. Control your smart home, play music, listen to the news – all from your… glasses?

North’s Focals are definitely an interesting concept, and once the showrooms open in November 2018 and glasses start arriving during the holiday season, they’ll certainly have a product to watch.

There are many new augmented reality devices coming to market over the next 6-18 months; The Magic Leap, a new hardware revision to the Microsoft Hololens, The Focal glasses.  So far none have been able to penetrate the market more than garnering interest as a tech demo.  We at Spitzer Tech will be interested to see if this new device can stir up more sales and adoption beyond the tech gadget community.

Did you find apk for android? You can find new Free Android Games and apps.
Smart